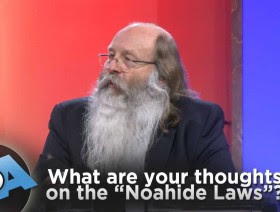 
The unofficial Sanhedrin in Israel is attempting to create a religious Noahide body that can replace the UN (here, here, here & here). The Sanhedrin has found it appropriate to remind non-Jews they must keep "sexual purity" under the Noahide Laws, this means homosexuals should be killed (here); but it means much more than that, under Noahide Law non-Jews and Jewish women may not commit adultery, but Jewish men are not executed as long as they sleep with a non-Jews wife (here), hypocrisy!

All who survive of all those nations that came up against Yerushalayim shall make a pilgrimage year by year to bow low to the King lord of Hosts and to observe the festival of Sukkot. Zechariah 14:16 (The Israel Bible™)

An Orthodox woman prays at the Cave of the Patriarchs in Hebron. (Photo: Miriam Alster/Flash90)
FacebookTwitterEmailWhatsAppPrintShare864
As part of its initiative to establish an Organization of 70 Nations to replace the United Nations, the Sanhedrin made a call for the nations to adhere to principles of sexual purity. Rabbi Hillel Weiss, the spokesman for the Sanhedrin, explained that this was extrapolated from the Rabbinic law which states that there are three sins that a Jew must choose to martyr himself rather than commit: idolatry, murder, and sexual transgression.
The first two sins are forbidden as part of the Noahide code incumbent upon all of mankind.
“The nations must purify themselves,” Weiss explained to Breaking Israel News. “This is a process of purifying your thoughts from idolatry. It also includes removing the sin of murder from their midst, which is expressed today through abortion and euthanasia. This also includes sexual purity.”
The rabbi emphasized that this was a matter of survival.
“Today, a person can choose to do good or evil. But in the end-of-days, only those who choose to take part in the Temple will survive,” Rabbi Weiss said, quoting the Prophet Zechariah.

All who survive of all those nations that came up against Yerushalayim shall make a pilgrimage year by year to bow low to the King lord of Hosts and to observe the festival of Sukkot. Zechariah 14:16

“The world is in a deep state of impurity in which marriage itself is being challenged,” Weiss maintained. “The culture has become one of desire run amok. If women do not give birth in purity, in a proper manner, then the fabric of society will come apart.”
Rabbi Weiss noted that marriage is an issue that lies at the root of many of society’s existential threats.
“As single-parent homes become the norm, crime and violence rise,” Rabbi Weiss noted.
He emphasized that one of the battlefields for sexual purity was the internet, which he characterized as the embodiment of the sin described in the Tenth Commandment which forbade coveting.
“It is no coincidence that the internet also enables the sin of slander to a level never before seen,” Rabbi Weiss said, noting another phenomenon that the prophets claimed would appear before the Messiah.

Ah, Those who call evil good And good evil; Who present darkness as light And light as darkness; Who present bitter as sweet And sweet as bitter! Isaiah 5:20

“This slander on the Internet is especially focused on making good look like evil and normalizing what has always been considered evil throughout human history,” Rabbi Weiss said.
The requirement for sexual purity is, of course, incumbent upon Jews, mandated in the Book of Leviticus.

Speak to the whole Israelite community and say to them: You shall be holy, for I, Hashem your God, am holy. Leviticus 19:2

Weiss cited Maimonides who interpreted this to mean that the Jews must maintain a high level of sexual purity.


As part of the Organization of 70 Nations initiative, the Sanhedrin issued a commemorative coin featuring an image of Nikki Haley, the former U.S. Ambassador to the UN, whom they invited to serve as the organization’s honorary president. Proceeds from sales of the coin are used for holding Temple reenactments, creating utensils to be used in the Third Temple, and education about the Temple. The Sanhedrin also oversees the production of olive oil, wine, and grain offerings produced under stringent conditions of purity.
Several countries including Guatemala, Honduras, and Mexico have already signed a pledge to take part in the organization and join Israel in bringing about the Third Temple.
Coins can be purchased on the Sanhedrin’s website.
Posted by Just Another Hindu at 5:50 AM