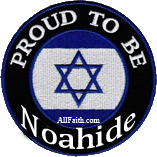 In this piece, a Noahide explains that it is not good for Jews to become Noahides or for non-Jews to become Jews, Jews should stay Jewish and non-Jews should be Noahides, he says this is because Jews have a special role to play as a priest nation and there is a symbiotic relationship between Jews and non-Jewish Noahides. A symbiosis of inequality (here) is not symbiosis, it is parasitism.

The Reform Movement has turned most Diaspora Jews into ethical monotheists - that is, Noahides.

More from the author ►
The Reform Movement takes pride in interpreting the Torah in what it considers a more tolerant and open-minded way. Since the mid-19th century this has meant stripping Judaism and Jewish life of ritual commandments.

The end result has been to effectively turn most Diaspora Jews into Noahides. That is, into ethical monotheists. This appears to be harmless until we remember that according to Judaism, Noahides are supposed to be Gentiles - not Jews!

Jews are meant to be a priestly nation and to take over a more challenging – and rewarding – relationship with God. This allows Jews to serve as a light unto the nations and gradually draw all of humanity towards Biblical morality and the worship of one God. The Seven Noahide Commandments intended for all humankind are: Not to worship idols; not to curse God; to establish courts of justice; not to commit murder; not to commit adultery or sexual immorality; not to steal; not to eat flesh torn from a living animal (i.e. not to gratuitously hurt animals).

Jewish denominational differences have global reverberations. If the Reform Movement hadn't co-opted Noahism, religious Jews might be able to successfully draw millions of people disenchanted with Christianity, Islam and agnosticism to the seven Noahide commandments that God enjoined upon all of humanity. This would promote the universal message of Judaism and facilitate the accomplishment of the Jewish people’s historical mission.

Religious Jews in the Diaspora cannot do this. If they did persuade more non-Jews about the merits and truth inherent in the Noahide commandments, these Gentiles might end up in Reform temples, where they would be induced to think that Noahism is Judaism and that Judaism is Noahism.

However there has never been any requirement in Judaism to join the Jewish people in order to embrace ethical monotheism.  That is why centuries prior to the emergence of the Reform Movement, synagogues in the Eastern Mediterranean attracted Gentile God-fearers. These God-fearers embraced Jewish ethics and Jewish theology, without surrendering their national, linguistic and cultural identities.

A representative of Reform Jews might object to this argument, claiming that religious Jews should promote Noahism irrespective of how similar Reform credo and Noahism actually are. Indeed, this argument might be legitimate in 50 years when most Reform Jews will be halakhic Gentiles. In the meantime, it is clear that any Jewish efforts to promote Noahism in the Diaspora will just add to the number of Gentiles who convert via Reform clergy . These conversions would however be regrettable since they aggravate the misunderstanding and misconceptions on what constitutes Jewish peoplehood, thus further dividing the Jewish world.

It would be wonderful if in the 21st century, irrespective of language, nation and race, the whole human family embraced the Noahide commandments. Expecting ethical monotheists to join the fold of Judaism is misguided.  Both Jews and Gentiles best fulfill our mission if we accept the commandments assigned to us as

God's priestly nation and God's lay children respectively. Unfortunately, diluting Judaism sabotages the spiritual symbiosis between Jews and Gentiles. This harms the advancement of humanity and – ultimately – the attainment of universal peace.
Posted by Just Another Hindu at 8:13 AM