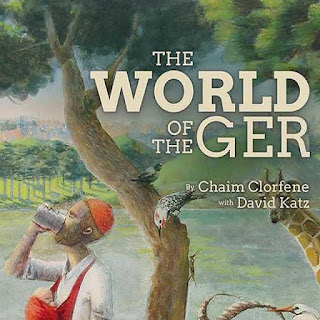 Sometimes Jews and Noahides will use confusing language when speaking about those who have accepted the Noahide Laws and have become Noahides. Sometimes you will hear the word "Ger Toshav", this is a very special designation of a Noahide who lives within the land of Israel (here). However, sometimes you will hear Rabbis refer to Noahides as simply "Ger", when used alone this usually indicates a Noahide living in any part of the world, as is discussed in the article below. According to some Rabbis, the growing movement of the Noahides (Ger) is a sign of the redemption and signals the coming collapse of all non-Jewish systems, by god or by human force?

“One law and one ordinance shall be both for you, and for the stranger that sojourneth with you.” Numbers 15:16 (The Israel Bible™)

Moses with the 10 Commandments. (José Camarón y Meliá/Wikimedia Commons/US Public Domain)
FacebookTwitterEmailWhatsAppPrintShare2,089
Most people think the Bible separates humanity into two basic categories – Jew and Gentile. In truth, the Bible has a third category, known in Torah literature as Ger.There are 60 verses in the Hebrew Bible that use the Hebrew word Ger (plural Gerim). It is almost always mistranslated as stranger or foreigner. It is also understood to mean convert.
According to Rabbis Chaim Clorfene and David Katz, co-authors of The World of the Ger, Ger is actually a third category, between Jew and Gentile, that existed in Biblical times and is re-emerging today as redemption draws ever closer.
Rabbi Clorfene spoke to Breaking Israel News about the connection between Ger and geula (redemption). “The Maharal (famous 16th century Jewish scholar) says that before the geula can come, the old order has to collapse, along with its institutions and processes and systems. I believe that the primary agent of the collapse will be the Gentile who comes to the Torah, connects with the Jewish people, and keeps the Sabbath,” he proclaimed.“Our God is his God, but he does not convert. This is the non-Jewish Ger. He can thrive only in geula. This Ger has now fully reemerged, for the first time since the destruction of Solomon’s Temple, 2500 years ago. And as he increases in numbers and in wisdom, the golus (exile) will collapse.”
Rabbi David Katz has spent thousands of hours researching what Jewish law has to say about the status of Ger. Recently, he translated an important rabbinic work on the topic from Hebrew to English. He will be in South Africa this month to meet with individuals who identify as, or are considering becoming, Gerim. He answers their questions according to Torah law.
Rabbi Katz plainly states, “In the Messianic era… there will be Ger in the world. They will come back. They will not convert [because] we will not accept converts in those days.” He further explained that Gerim “need Torah for their souls… There is a Ger in the fabric of creation and they are starving and thirsty for Torah. It’s a hundred billion percent kosher.”
In the Preface to The World of the Ger, Rabbi Clorfene writes, “In the times of King David and King Solomon, the Land of Israel’s population included hundreds of thousands of righteous Gentiles. This is the Ger Toshav, the foreign resident mentioned in the Torah. And so it was throughout the First Temple period. But then, the Kingdom of Israel was exiled to Assyria as the Ten Lost Tribes. And the Kingdom of Judea was exiled to Babylon (those few who Nebuchadnezzar left alive). And the Noahide (all Gerim Toshavim are Noahides) got lost in the shuffle.”
The Biblical Ger has a different status than a Gentile. The Ger of the Bible was an absolute monotheist who accepted the Seven Laws of Noah. The Biblical Ger has permission from the Torah to adopt Jewish practices, such as learning Torah, celebrating Shabbat and avoiding pork and shellfish. The true Ger is a kosher non-Jew according to Torah law.


Among the most well-known Gerim in the Bible are Shem, the son of Noah, Yitro (Jethro), the father-in-law of Moses and the Queen of Sheba.There are multiple categories of Ger found in Judaism’s rabbinic literature and explaining the nuances extends far beyond the purview of this article. The concept of Ger is not a simple one and the existence of Ger today is a matter of great controversy among rabbis.Most Jewish people today are misinformed, or completely uninformed, that such a Torah category even exists; they use the word Ger to refer to a convert to Judaism.
Nevertheless, there are individuals today who identify as Ger. There are small communities of Gerim in Texas and in South Africa and a number of Facebook groups where people who are exploring, or have committed themselves to, the Torah category of Ger are able to network.
Russell Kirk, a self-identified Ger from Waco, TX, spoke to Breaking Israel News about his spiritual journey, which began in earnest 17 years ago. “What I have learned in my pursuit of understanding Ger that strengthened my faith in God is that even from the foundation of creation, HaShem (God) considered me in His Torah. The Torah of HaShem is totally complete with a plan for grace, mercy, and salvation for the non-Jew. From the very beginning HaShem has always considered the Ger.”In 2014, the Chief Rabbinate formally recognized a Ger for the first time in 2,500 years. This unusual action was taken in connection with the observance of Shmittah, the Biblical requirement to rest the land of Israel every seven years.

But in the seventh year shall be a sabbath of rest unto the land, a sabbath for Hashem: thou shalt neither sow thy field, nor prune thy vineyard. Leviticus 25:4

The 2014 decision of the Chief Rabbinate was not intended to set a precedent for Israel to formally recognize Gerim in our day. However, it is clear that according to many leading rabbis, the time of the Ger is at hand.

Posted by Just Another Hindu at 12:20 PM