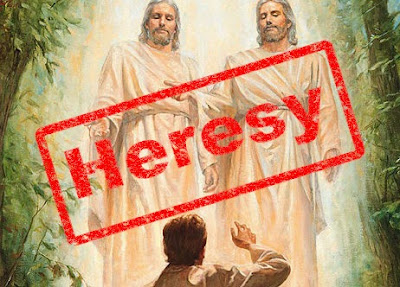 The Talmud claims that Jesus was a blasphemer and sorcerer, it says it is better to commit incest then become a Christian and Jews who do convert to Christianity would be accused of apostasy (here). In keeping with this ideology, a Chief Rabbi in the West Bank of Israel has been accused of heresy for stating that Christianity is acceptable and Jesus is a Rabbi. The Chief Rabbi was forced to change a statement where he said Christianity was acceptable for Christians to stating that non-Jews can only practice their religion within "the shared framework of the Noahide Law", which would obviously not allow the worship of Jesus Christ as god.

An Orthodox rabbi who caused a stir by calling Jesus ‘rabbi’ is ahead of his times.

Shortly before the end of 2009, Pope Benedict XVI took the decision to advance the sainthood cause of Pius XII, the wartime pope whose silence on the Shoah has caused many a heated debate and polarised opinion over the years. This painful issue has been at the heart of contemporary Jewish-Christian disharmony on an international scale. However, a new commotion has broken out in recent days, at least in some quarters of the Orthodox blogosphere. And what is this new aspect of Jewish-Christian relations which is causing such consternation? Answer: the praise of a rabbi called Jesus.

In a recent YouTube video, the Chief Rabbi of Efrat in the West Bank, Shlomo Riskin, praised Jesus and referred to him as “Rabbi Jesus”. Riskin is the charismatic founder of the Centre for Jewish-Christian Understanding and Co-operation, which engages in dialogue primarily with evangelical Christians. The video was clearly posted for a Christian audience but it has caused shock waves among Orthodox Jews and especially the Charedi community. Rabbi Riskin stated on the video that Jesus was a model rabbi who “lived the life of a Jewish rabbi in Israel”.

His views would not raise the eyebrows of any Jewish participants in Jewish-Christian dialogue nor would they shock any students learning about “Jesus the Jew” in theology classes at university. However, they have caused as much outrage as the publication in 2002 of Chief Rabbi Sacks’s book, Dignity of Difference, which had to be quickly revised to avoid accusations of heresy.

Sacks was criticised for suggesting that Judaism, Christianity, and Islam were equal on theological grounds, which led him to rephrase some statements. For example, in the second edition he removed the statement that “God has spoken to mankind in many languages: through Judaism to Jews, Christianity to Christians, Islam to Muslims”, which became “As Jews we believe that God has made a covenant with the singular people, but [this] does not exclude the possibility of other peoples, cultures and faith finding their own relationship with God within the shared frame of the Noahide laws.”

Similar accusations of heresy are now being thrown at Rabbi Riskin, who had to offer a retraction in another YouTube video where he expressed remorse at describing Jesus as a rabbi stating it was an “unfortunate” term. It is a great shame that Rabbi Riskin was forced to backtrack because there has been a significant change in Jewish attitudes towards Christianity.

Until recently, most Jews have chosen not to think of Jesus at all

Although Jewish indifference or hostility to Jesus has not by any means disappeared, the signs have been encouraging. Positive words about Jesus have been expressed by Orthodox Jewish leaders for over 200 years. For example, in Seder Olam Rabbah Vezuta, the talmudic scholar Jacob Emden (1697-1776) wrote positively about Jesus arguing that he had not sought to denigrate Judaism and that his teachings were primarily concerned to communicate the Noachide laws to gentiles.

Surely, at a minimum, Jewish education today should include learning that Jesus and his family would have been Torah observant, kept Shabbat, circumcised their males, attended synagogue, observed purity laws in relation to childbirth and menstruation, kept kosher, and so on. While the Gospels record disputes about Jesus’s interpretation of a few of these, the notion of a Christian Jesus, who did not live by Torah or only by its ethical values, does not fit historical reality.

Not only Christians but Jews, Orthodox and Progressive, religious and secular, would benefit from realising that Jesus lived his life not as a Christian but as a Jew. The Christian rediscovery of the Jewishness of Jesus has been a significant factor in the development in modern times of a Christian respect for Jews and Judaism. Riskin’s centre in Efrat should be commended for its aim to strengthen relations between Christians and Orthodox Jews.

Because the words and deeds of Jesus the Jew have been, and are, an inspiration to countless millions of men and women, it is well overdue for Jews to give a little more attention to the life and teaching of this outstanding Jew.

Of course, when the Church persecuted Jews in an effort to convert them, Jewish attitudes to Jesus became hostile. It is a sad fact of history that the followers of this great Jew have brought much suffering upon the Jewish people, so that for centuries it was very hard for any Jew even to think of Jesus without difficulty. Up until recently, most Jews have chosen not to think of him at all.

Geza Vermes and Ed Sanders are two scholars who in recent years have drawn wide attention among Christians to Jesus’s Jewish origins. Jesus was a Jew, not an alien intruder in first-century Palestine. Whatever else he was, he was a reformer of Jewish beliefs, not an indiscriminate faultfinder of them.

“What commandment is the first of all?” Jesus was asked. He answered as any rabbinic Jew: “The first is: Hear O Israel, the Lord our God, the Lord is One. And you shall love the Lord your God with all your heart, with all your soul and with all your might. The second is this: You shall love your neighbour as yourself. There is no other commandment greater than these” (Mark 12:28-31). Every Jew will recognise in Jesus’s answer the Shema and the mitzvah of Leviticus 19:18.

For Jews, the significance of Jesus must be in his life rather than his death, the life of a rabbi who had faith in God. Shlomo Riskin is perhaps ahead of the times in the Orthodox world by taking pride in the fact that the man revered by over two billion people across the globe was born, lived and died a Jew.

Dr Kessler is executive director of the Woolf Institute of Abrahamic Faiths. His forthcoming book, ‘An introduction to Jewish-Christian relations’, is published by Cambridge University Press next month
Posted by Just Another Hindu at 7:57 AM