Trump asked to rebuild the 3rd Temple under the Noahide covenant 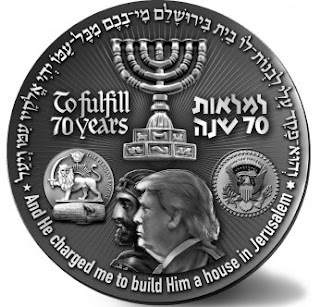 The highest religious court in the Jewish religion, which would likely eventually have jurisdiction over all Noahide nations, is called the Sanhedrin. While there is technically no legal Sanhedrin at this time, there is a body in Israel calling itself by this name and it is continuously seeking more and more recognition and credibility. From Sept 25-27, this Sanhedrin will be hosting a 70 Nations conference (70 Noahide Nations) which will focus on promulgating the Noahide Laws to the world, and many official dignitaries from several nations will be attending (here). This same group sent official letters to Donald Trump requesting that he forward the Noahide Laws in his nation (here), which have already been recognized by the US Congress in law (here). While Donald Trump has not confirmed he or any US representative will be at the meeting, Breaking Isreal News has released credible rumors that Donald Trump sent emissaries to an influential Rabbi in Isreal asking when the Jewish Messiah would arrive. Why would Trump as a Christian put stock in the coming of the Jewish Messiah?


Trump is being called "Cyrus the Great", who even though he was not Jewish, facilitated the rebuilding of the 2nd Temple in Jerusalem, and many Jews believe Trump has a role to play in building the 3rd Temple as the "Head of Edom" or ruler of the non-Jews, they Sanhedrin has even minted a coin which depicts Trump along side Cyrus the Great (above). Members of the Sanhedrin who are hosting the 70 Noahide nations conference, have said that Trump has an obligation under the Noahide Laws to lead the world to the building of the 3rd Temple because this 3rd Temple and Jerusalem need to become the spiritual center of the world where all nations come together under the Noahide Laws as directed by religious Jewry.  Again, why was Trump asking when the Jewish Messiah will arrive?  Is Trump planning to build the 3rd Temple in time to usher in the Messiah who some say will rule over the world under Noahide Law (here)? Isn't this what the book of Revelations in the Christain Bible says will lead to mass bloodshed, doesn't Trump know his own religion's prophecies, the 3rd Temple is needed to usher in the Anti-Christ, why would Trump want to facilitate that as a Christian?  Trump's daughter is a radical Noahide cultist (here), has Trump joined the cult, has he become a Noahide, turning his back on his nation and responsibility to protect the constitution? Something is very fishy about this.


“Thus said King Cyrus of Persia: God of Heaven has given me all the kingdoms of the earth and has charged me with building Him a house in Yerushalayim, which is in Yehuda. Ezra 1:2 (The Israel Bible™)

US President Donald Trump prays at the Western Wall, Judaism’s holiest prayer site in the Old City of Jerusalem on May 22, 2017. (Nati Shohat/Flash90)
FacebookTwitterEmailWhatsAppPrintShare6,530
Jewish sources hint that the alliance between the U.S and Israel is the prophetic end-of-days coming together of Esav and Jacob as a prelude to the building of the Third Temple. Some experts believe that President Trump fulfills many of the requirements for the leader of Edom that will make this happen.
Emissaries from Trump
Two weeks ago, two religious Jews appeared before Rabbi Cham Kanievsky, one of the most influential rabbis of this generation. The emissaries reportedly bore an inquiry from President Trump, asking when the Moshiach (Messiah) will arrive. The rabbi avoided answering the question, asking instead when the American Jews will come to live in Israel.
Many were skeptical of the story, rejecting the idea that Trump, a Christian, would inquire from a Jewish rabbi concerning the Messiah. But Trump, as the non-Jewish leader of the U.S., has a prophesied role to play in the building of the Temple and it was for this reason he inquired. Trump wanted to know when he will be called upon to perform this role.
Trump as the modern-day Cyrus
This expectation regarding Trump was first expressed by the Sanhedrin after his election when they compared him to the Persian King Cyrus who commanded by God to facilitate the building of the Second Temple specifically because he was influential in global politics.

Thus saith Koresh (Cyrus) king of Paras (Persia): All the kingdoms of the earth hath Hashem, the God of heaven, given me; and He hath charged me to build Him a house in Yerushalayim, which is in Yehuda. Ezra 1:2

The comparison was so apt that it was adopted by Israeli Prime Minister Netanyahu who also compared the U.S. president to the Persian King.
Building of the Third Temple will be intitiated by the 70 Nations
Rabbi Hillel Weiss, the spokesman for the Sanhedrin, noted that Trump’s role in building the Third Temple was essential to so many of the issues that concern people around the world.
“Trump can lead the nations of the world to global peace through building the Temple, the source of peace,” Rabbi Weiss explained. “This will offset the disgraceful United Nations resolutions that are the root cause of increasing evil in the world.”
The Sandhedin is currently working to create an Organization of 70 Nations based in Jerusalem to replace the United Nations.
“The Jews will do the actual building of the Third Temple but in order for the Third Temple to be a House of Prayer for all nations, the nations must have a part in its creation,” Rabbi Weiss explained. “The troubles that are facing the world today are issues that can only be addressed by a higher level of international discourse and cooperation. The effort to erase national identities and national borders is diametrically opposed to this and it is this ‘new world order’ that Trump is really fighting. The solution is the Third Temple as a House of Prayer for all nations and the Organization of 70 Nations, both of which require nations to express their unique identities.”
Rabbi Weiss emphasized that the concept of international cooperation is based in the universal covenant that God made with Noah which established the 70 nations and requires the participation of all the nations.
“Just like the covenant God made with the Jews, this covenant is eternal,” Rabbi Weiss said. “Just as the covenant with Abraham had ramifications for the well-being of the Jews due to their adherence to the covenant, the covenant with the nations also has real-world ramifications. God promised Noah that he would not bring another flood of water but the Midrash teaches us that, as he did with Sodom and Gomorrah, the nations are held accountable for their part in the Noahide covenant.”
“Trump needs to take his role as the leader in the universal return to this covenant,” Rabbi Weiss said. “He began this by rejecting the anti-Bible United Nations but just as Cyrus did, he needs to turn the world towards the Temple. Just as Abraham pleaded with Hashem (God, literally ‘the name’) in order to save the non-Jews of Sodom and Gomorrah, we are pleading and praying that Trump will turn the nations towards Jerusalem; for their sake.”
Song of Songs: The Oath of the 70 Nations to take part in building the Third Temple
Rabbi Yoel Schwartz, the head of the Sanhedrin’s Noahide Court and a highly-respected Torah authority, emphasized that the nations of the world have a prophesied role in the building of the Temple. He based this opinion on a Midrashic (homiletic teachings) tradition of a verse in Song of Songs.

I adjure you, O maidens of Yerushalayim, By gazelles or by hinds of the field: Do not wake or rouse Love until it please! Song of Songs 2:7

The term “I adjure you maidens of Jerusalem” is repeated four times in Song of Songs and the term “maidens” (banot) can also be translated as ‘build’.
“The Midrash teaches that the non-Jews are the ‘maidens of Jerusalem’ have taken an oath tol initiate the building of the Third Temple and after they begin, we will join in their effort,” Rabbi Schwartz explained. “Trump is certainly moving in this direction.”
Christians repenting for Rome destroying the Second Temple
Another rabbi who believes that the U.S. President will play a major role in the construction of the Third Temple is Rabbi Yosef Berger, the rabbi of King David’s Tomb on Mount Zion. Rabbi Berger emphasized that it is essential that President Trump, as a Christian, take a role in the building of the Third Temple.
Rabbi Berger quoted Rabbi Bahya ben Asher ibn Halawa, a 13th-century Spanish Biblical commentator also known as “Rabbeinu Behaye.” The medieval scholar wrote that “the first and second Temples were built by the descendants of King David, but in the future, the Third Temple will be built by descendants of Edom.” Rabbi Berger emphasized that these sources state explicitly that the Third Temple will be built by the descendants of Rome, i.e. Christianity.
“Rabbeinu Behaye explained this is a tikkun (reparation),” Rabbi Berger said. “Rome destroyed the Second Temple so Rome’s descendants, the Christians, are going to amend this by taking part in bringing the Third Temple.”
“Like Cyrus, Trump’s connection to the Messiah is that he will play a role in one of the major functions of the Messiah. He will pave the way for building the Third Temple. Trump will not personally merit building the Temple,” he continued. “Like Cyrus, he will pave the way for men who will begin the construction, and when the time is right, the Third Temple will descend from heaven.”
“No leader in history has recognized Jerusalem as the capital of the Jews and Israel,” he pointed out.  “He has already created a great tikkun (reparation) for the Christians through his unprecedented relationship with Jerusalem. Trump is the representative of Edom that will perform that final historic reparation for his entire nation by building the Temple.”
Posted by Just Another Hindu at 6:44 AM