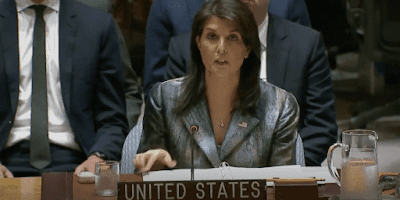 In only a few day, from Sept 25-27, a body in Israel which is calling itself the (unofficial) Sanhedrin (Jewish Hight Court) will be hosting the 70 Nations conference to try to return the world to the Noahide Laws, many dignitaries from various nations will be attending and there will be an animal sacrifice (here & here). Jews and Noahides keep trying to tell us that we need not pay attention because this is not an official Sanhedrin and so they cannot legally push for the decapitation of non-Jews under Noahide Law, but the fact of the matter is there is no need for a Sanhedrin to kill non-Jews under the Noahide Laws at this time, the Noahide Laws are forever and eternal (here & here). This Sanhedrin has asked Nikki Haley, the former U.S. Ambassador to the United Nations, to be the honorary president of the Organization of 70 Nations. As of yet, it seems as though she did not respond, however the Sanhedrin wants the world to know that each nation will be responsible for setting up Noahide courts which would murder non-Jews who do not comply with the draconian Noahide Laws... does Nikki Haley understand what she is being asked to do?  Is she willingly being silent about an obvious threat to our nation and existence? Trump also has been told about the Noahide Laws (here & here) and he has signed Education and Sharing Day with states the Noahide Laws are the foundation of America and that we will sign and "international scroll" pledging to return the world to the Noahide Laws (here)... doesn't it sound like they are sweeping this under the rug... don't they care about the wellbeing of non-Jews?

“Moshe chose capable men out of all Yisrael, and appointed them heads over the people—chiefs of thousands, hundreds, fifties, and tens;” Exodus 18:25 (The Israel Bible™)

Former U.S. Ambassador Nikki Haley addresses the UN General Assembly. (Credit: Screenshot)
FacebookTwitterEmailWhatsAppPrintShare5,804
During their session during the recent Hanukkah holiday, the Sanhedrin decided to invite Nikki Haley, the former U.S. Ambassador to the United Nations, to be the honorary president of the Organization of 70 Nations.
“God established the borders of the world based on the 70 children of Israel who went down to Egypt and the 70 nations that came out from Noah. The concept of 70 Nations is from the Bible and symbolizes the basis for the organization while not being intended to imply a limit or requirement for participation.”
The concept of 70 nations also appears in reference to the 70 oxen offered in the Temple throughout Sukkot (the feast of the tabernacles) which the Talmud (Sukkah 55b) teaches are for the merit of the 70 nations.
“The decisions by President Donald Trump as enacted by his emissary, Nikki Haley, regarding the United Nations, by which he removed his country’s support were fitting and proper responses to actions of the UN.”
Rabbi Hillel Weiss, spokesman for the Sanhedrin, explained their decision to choose Nikki Haley to head the organization.
“Nikki Haley displayed a strength of character that showed a deeply sincere and unwavering willingness to fight for truth,” Rabbi Weiss told Breaking Israel News. “She was a faithful representative of the president but her character gave her a strength that went far beyond the requirements of her job.”
Haley was raised a Sikh but converted to Christianity later in life. Nonetheless, Weiss insisted that while serving at the UN, she acted in a manner that represented Biblical tenets.
“Her support of Israel’s claim to the Golan and Jerusalem came from a belief in the Biblical boundaries of Israel and our claim to those boundaries today,” said Weiss. “This is the type of person we need to head a true Biblical organization of nations. Just as the U.N. is trying too rewrite Jewish history and steal our culture and borders, they can do so for any other nations. This must not happen. This organization must remain an organization of universal truth and not a tool for political interests.”
The Sanhedrin referred to several resolutions by the United Nations Educational, Scientific and Cultural Organization (UNESCO) denying the connection between the Jewish people and their holy sites on the Temple Mount and in Hebron. The Sanhedrin statement noted that these resolutions directly contradicted the Bible which explicitly describes the immutable historical and spiritual connection between the Jews and the land of Israel.
The Sanhedrin also cited a recent move by the United Nations Human Rights Council (UNHRC) to declare abortions and assisted suicides as universal human rights. The body declared  these actions to be in direct violation of the Noahide prohibition against spilling blood.
“In the Organization of 70 Nations based on Mount Zion, every nation shall retain its language, culture, and traditions. Each nation shall retain its sovereignty in its place without any threat from roaming bands of refugees.”
“Each nation shall be solely responsible for maintaining a fitting and proper justice system as per the Seven Noahide Laws incumbent upon all of mankind.”
Rabbi Weiss explained the necessity for the declaration.
“The world faces global threats in the ecology, from war, and from terrorism,” he explained. “The Bible includes a framework for the nations to join together with universal values and a belief in the one creator as described in the Bible. The United Nations was begun with this framework in mind but have moved away from these values and has become a political tool advocating principals that go against the basis of humanity and will surely lead to the destruction of all humanity.”
“Globalization is a lie that goes against the Biblical concept of a sovereign nation. Each nation has its own borders, its own resources, its own language and culture. This is true of Israel as it is for every nation. Israel has the right to establish its capital, undivided. Israel and every other country has the right, even the obligation, to protect its people from invasion, whether it comes in the guise of massive immigration or open threat. Entire continents, specifically Africa and South America, have been deprived of the benefits of their resources. The United Nations has never addressed any of these issues.”


The project has already begun and at the World Creation Concert in September, ambassadors from Honduras and Guatemala along with representatives from Mexico officially signed an agreement to take part.
The Sanhedrin is planning a conference in Jerusalem to present the Organization of 70 Nations to the world and to invite nations to participate. They also plan on minting a commemorative coin engraved with the image of Nikki Haley in recognition of all she has done for Israel.
Posted by Just Another Hindu at 7:15 AM