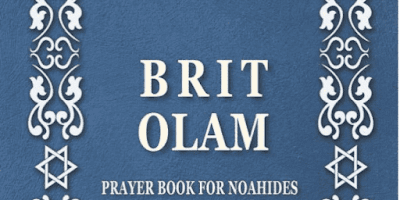 The "Noahide World Center" is a Noahide evangelist organiztion based in Israel that thas the official support of the Israeli government, the Chief Rabbinate of Israel and Prime Minister Netanyahu (here). The Noahide World Center recently published a prayer book for non-Jewish Noahides. In an article on Breaking Isreal News, the book is explained. Here are some details: the book was created to help usher in 3rd Temple Political Zionism among non-Jews who have a role in the Zionist redemption; Jewry could not implement the Noahide movement before because they were not in a position to do so, now they are; there will be places where non-Jews may not enter (is there anywhere Jews may not enter?).

“Oh, hear in Your heavenly abode and grant all that the foreigner asks You for. Thus all the peoples of the earth will know Your name and revere You, as does Your people Yisrael; and they will recognize that Your name is attached to this House that I have built.” I Kings 8:43 (The Israel Bible™)

Cover of Brit Olam prayer book. (Courtesy Brit Olam)
FacebookTwitterEmailWhatsAppPrintShare605
As preparations move forward to build the Third Temple as the House of Prayer for All Nations, rabbis are beginning to cope with the practical issues of what that prayer will be. One rabbi has prepared a prayer book specifically for non-Jews that contains daily prayers as well as for any occasion.
Under the direction of Rabbi Oury Amos Cherki, the Noahide World Center-Brit Olam created a prayer book for Noahides. Noahides are non-Jews who perform the seven Noahide laws incumbent upon all of mankind with the intention of doing so because it is God’s will.
The structure of the prayer book is comprehensive and very close to that of the Jewish Siddur (order), including prayers for regular weekdays, the Sabbath, holidays, and a full Haggadah for the Passover seder ritual. There is also a section titled “Gates of Learning” to help clarify the fundamental principles of faith.
Rav Cherki believes that it was essential to create a prayer book for non-Jews now. As a part of his philosophy, Rabbi Cherki places a particular emphasis on the meaning of Zionism and the establishment of the state of Israel. He asserts that the birth of modern political Zionism signified the atchalta d’geulah (beginning of the redemption) and the non-Jews play an important role in this Jewish redemption.


“The increase of people observing the Noahide laws is very important in this era,” Rabbi Cherki told Breaking Israel News. “The nation of Israel is currently in a process of geula (redemption). This is evident from our return to our land and our sovereign national identity.”
This being the case, he maintains that it is now time for Jewish people to perform their Biblically mandated universal function: to bring blessing to all humanity while respecting the distinct national identities.
“The creation of the State of Israel has made it once again incumbent upon us as Jews to once again act as a light unto the nations,” Rabbi Cherki said. “This began with Biblical Abraham and through this, all the people of the world were blessed. It is possible to say that this is the nature of the Jews, our very essence, and the fact that we did not act as such during the exile. This is only because we were fighting for our survival but it is now time to return to being a light unto the nations.”
“It is clear that as we begin to transmit the word of God to the nations that they will, as the Prophet Isaiah said, turn to Jerusalem to receive this instruction.”

“As the nations turn to Jerusalem for instruction, it will, as a direct result, increase their spiritual lives,” Rabi Cherki said. “We have to provide for this need.”
[wpipa id=”94167″]
As such, Brit Olam produced a unique prayer book to fill this need.
“This prayer book allows for people to pray a spontaneous, unstructured prayer as well as the ability to join in Jewish prayers which are structured in a specific manner. Jewish prayer is only in a specific formula and at specific times. This was instituted after the destruction of the Temple in order to imbue the prayers with a ritual element.”
Though based on Jewish prayer, the Brit Olam prayer book is very different than a Jewish siddur.
“There is no need for the nations to pray according to a specific formula,” Rabbi Cherki explained. “What we did in our siddur was to make suggestions, a taste, to shed upon the prayer a Jewish light they can access if they choose. We did so at the request of Noahides who came to us.”
There are other differences as well.
“For example, for clear practical reasons, a non-Jew cannot use the expression, ‘the God of my fathers’ as Jews do when praying,” Rabbi Cherki explained. “In this case, they will need to refer to ‘the God of Israel’ or ‘the God of Abraham, Isaac, and Jacob.”
A surprising addition to the Brit Olam prayer book was the Shema, the twice-daily declaration by Jews of God’s unity.
“The nations may say the first line of the Shema which is a declaration of faith that God is one,” Rabbi Cherki said. “According to Jewish sources, in the future, God will be one throughout the world. This verse describes a dynamic in history through which God will be revealed as one to the entire world.”
“There are many aspects of Jewish prayer the non-Jew may not participate in. For example, a non-Jew may not go up to read from the Torah. It is much better for the Noahide to organize his own prayer.”
“In addition to prayers, our siddur contains life advice for events such as mourning, weddings, birth, and the like.”
“There is no need for Jews and non-Jews to pray together but neither is this forbidden. It is better for communities to organize in a manner that is more-suited for them. Noahides are more than welcome to join in with Jewish prayers, even in a synagogue and we will receive them with love and joy.”
This multi-national prayer is consistent with Rabbi Cherki’s vision of the Third Temple on the Temple Mount as a place of universal prayer.

I will bring them to My sacred mount And let them rejoice in My house of prayer. Their burnt offerings and sacrifices Shall be welcome on My mizbayach; For My House shall be called A house of prayer for all peoples.” Isaiah 56:7

“Just as there are places in the Temple set aside for Kohanim that non-Kohanim may not enter, there will be places non-Jews will not enter. But there will be places for them to participate in the Temple service and to pray, just as there were in the First and Second Temples.”
Rabbi Cherki requested that the article contain a blessing for the readers.
“I would like to bless all of mankind to see how we uniquely merited to live in the time when the nation of Israel returned to our land so that we can finally fulfill our mission to serve as the hosts at the center of brotherhood for all of mankind to become closer to God,” Rabbi Cherki said.
The Brit Olam prayer book can be viewed in part as a PDF or purchased as an app for Android cellphones. A paperback or hardcover copy of the book can be ordered from Amazon.
Posted by Just Another Hindu at 6:31 AM