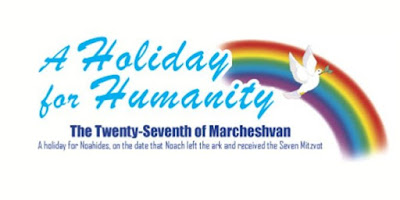 Rabbi Yehoshua S. Hecht is Presidium Chairman of Igud Harabonim, the Rabbinical Alliance of America, President of the Rabbinical Council of Connecticut and congregational rabbi of Beth Israel of Westport/Norwalk, Connecticut, USA. In an article he wrote for Israel National News, Rabbi Heccht states that July 4th is a day for Americans to celebrate the Noahide Laws... I thought it was to celebrate our independence from tyrannies like the Noahide Laws.

America is what it is today because we are a Nation under G-D.

Rabbi Yehoshua S. Hecht is Presidium Chairman of Igud Harabonim, the Rabbinical Alliance of America, President of the Rabbinical Council of Connecticut and congregational rabbi of Beth Israel of Westport/Norwalk, Connecticut, USA.
More from the author ►


Twenty candidates running for the Democratic Party Nomination for President held their first debate for the presidential contest in Miami on June 26 and June 27.

Among the hot topics of discussion were global warming and global change as well as the necessity of providing healthcare for non-citizens of the USA.

Reviewing the content of the debate - one came away with the startling realization that not one of the men and women on stage - coming from every race, creed and religion - thought it important to bring the mention of G-D in to the discussion.

Many millions of Americans viewed with great interest the debates seeking to be inspired and uplifted by the ideas being espoused by the contestants on the political stage. Regrettably not one of these candidates brought up the issue of faith in the Creator of all that exists.

Apparently every issue and topic was up for discussion save the most consequential one of bringing America back to its moral and ethical roots - faith in a Higher Being - the tether and foundation of support that has guided this great republic to be founded with liberty and justice for all.

As a 4th generation American, I was struck by the humanistic and at times narcissistic pontification of these candidates - who did not find it at all relevant to mention faith, religion and trust in the Creator. It was as if all the discussion over the four hour televised event was designed by intent to exclude and certainly to ignore any mention of G-D or the blessings and beneficence of the Creator, that has allowed the USA to be blessed with the incredible gifts of wealth, ingenuity, and happiness.

America is what it is today because we are a Nation under G-D and recognize that this fundamental belief is what allowed us to heal after the Civil War and gave us the fortitude to defeat in our day the atrocity called Communism.

We Americans are mostly a country and citizenry that looks out for each other – as we are all the descendants of Noah enjoined to keep and uphold the Seven Universal Laws of Noah that are enumerated in the Talmud (*Sanhedrin 56).

Regretfully, the Democratic Party debate featuring twenty talented and highly educated individuals seeking the Nations highest and most consequential office left me with a dreadful feeling of emptiness that its possible to declare - twenty equals Zero!

Moving forward we need to reiterate our belief and dependence upon G-D’s grace and protection by recognizing the divine image inherent in every individual.

The new values that Americans are told to take pride in as well as to embrace, celebrate and promote are undermining traditional family values and are not helping American society at all.

On this 4th of July season let all of America’s citizenry take pride in the ideals that the founders stated so eloquently in the Declaration of Independence.

July 4th is a time to give thanks to our Creator and to show our respect and regard for the Seven Universal Laws of Noah and that of family values.

May G-D continue to bless America and strengthen its leadership role in the world so that decency and liberty will be the portion for all of humanity to benefit fully the blessings of our benevolent Creator.