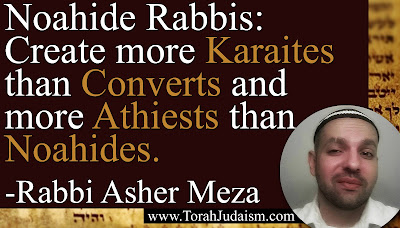 
Again, like the issue with whether or not non-Jews are allowed to celebrate any holidays (here), we now have contradictions on what areas of the Torah non-Jews are allowed to learn. The Talmud and some Jewish scholars agree that non-Jews may not learn all of Torah, only the Noahide Laws, and if they do, they are liable for execution (here, here & here). But now we have Rabbis who say that keeping the Noahide Laws are not enough and non-Jews need to learn the extent of Torah. Who is in control of making the standards of Noahide Law, are we going to be under competing Rabbis, is what is legal today going to be illegal tomorrow? What if non-Jews get confused and can't keep up, are we executed because a bunch of Rabbis can't get it together? This is insane!

“A time is coming—declares my God—when I will send a famine upon the land: not a hunger for bread or a thirst for water, but for hearing the words of Hashem.” Amos 8:11 (The Israel Bible™)

(Photo: Wiki Commons)
FacebookTwitterEmailWhatsAppPrintShare2,645
Many Jews view the Torah as a gift from God that belongs to the Jewish people alone, but is that still the case? More specifically, should Torah study only be for Jews?
Rabbi Yitzchak Ginsburgh, one of Israel’s foremost teachers of Kabbalah (Jewish mysticism) and Chassidut (the study of the inner dimensions of Torah), has been addressing this question for the past few years.
In a transcript of a recent talk called “The Fourth Revolution: Torah Study for Gentiles,” Rabbi Ginsburgh acknowledged that the Torah was originally given exclusively to the Jewish people. Over time however, there have been multiple paradigm shifts in approaches to Torah study among which have included putting the Oral Torah down in writing as well as opening up Torah study to women.
According to Rabbi Ginsburgh, the world is now ready for the fourth revolution, which will be to more fully introduce Torah study for non-Jews. When non-Jews study Torah, the words of Isaiah are being fulfilled.

“It is the task of the Jewish people to teach and disseminate the Torah of the Noahides to all of mankind,” Rabbi Ginsburgh acknowledged. “The Lubavitcher Rebbe (beloved 20th century Chassidic rabbi) stressed that in our generation, the world is ready and it is time for us to put this into practice.”
The “Torah of the Noahides” is a reference to the Sheva Mitzvot Bnei Noach – the seven Noahide Laws, which according to the Talmud, were given by God to Noah and intended for all of humanity.
“In practice, the Noahide laws are the most fundamental human obligations,” taught Rabbi Ginsburgh. “But, keeping the seven Noahide mitzvot does not suffice. This level of Torah study alone cannot fully realize the idea of tikkun olam (spiritual repair of the world in preparation for Messianic days).”
In other words, teaching the seven Noahide Laws to non-Jews is no longer good enough in the current era, which is approaching the End of Days. Instead, Rabbi Ginsburgh strongly advocates for much more Torah study among non-Jews.
“[T]he nations of the world can only recognize the Torah as the source of all the sparks of truth that their religions contain if they are exposed to the entire Torah in all its glory,” he explained. “They must study Torah in a way that reveals its depth and its profound relevance to their own lives.”
What does this mean practically? Rabbi Ginsburgh charges the Jewish people with a crucial mission.
“We are being called upon to begin offering Torah to the non-Jews, without limiting them to studying only the seven Noahide laws alone. They need to be exposed to the entire expanse of Torah teachings.”
“The intention in teaching Torah to non-Jews Torah is not to preach conversion,” he stressed. “If a non-Jew wishes to convert to Judaism, he or she may do so, but this must be from their own free choice, without coercion.”
“Teaching Torah means sharing with the nations of the world some of the infinite wisdom and beauty that it contains.”

For then I will make the peoples pure of speech, So that they all invoke Hashem by name And serve Him with one accord. Zephaniah 3:9

Anticipating that many Jews may find his message to be radical, Rabbi Ginsburgh reminded his Jewish audience that there are benefits for Jews willing to teach Torah to non-Jews.
“Teaching Torah to non-Jews is a great challenge to any individual who takes it upon himself, but encountering people who are far removed from Torah will bring him into contact with questions and new perspectives that will rejuvenate his relationship with the Torah and infuse it with new motivation,” he advised his Jewish students.
Rabbi Ginsburg also suggested that “teaching the Torah to non-Jews augments the Jewish people’s status as ‘a kingdom of priests and a holy nation.’”

But you shall be to Me a kingdom of priests and a holy nation.’ These are the words that you shall speak to the children of Yisrael.” Exodus 19:6

“The time has come to act for God. With God’s help, the fourth revolution [more fully opening the doors of Torah study for non-Jews] will… [bring] true peace and light to the world,” Rabbi Ginsburgh concluded.
Posted by Just Another Hindu at 8:35 AM