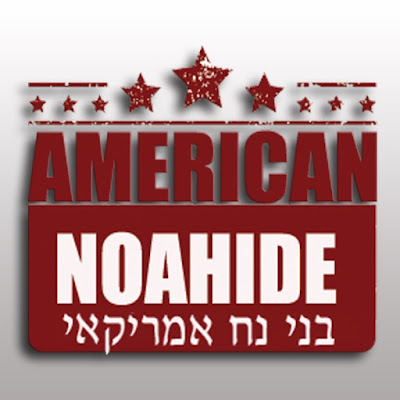 
Professor Paul Eidelberg who founded the Israeli-American Renaissance Institute has said before that the only reason America is exceptional is because it was founded on the Noahide Laws (here). In this article, he once again attempts to convince us that American is the only nation which was explicitly founded upon the Noahide Laws, and to be fair this is what American Public Law 102-14 states (here), but he also claims that the Noahide Laws were the foundation of the "fifteen Capital Laws of New England".  Prof. Eidelberg does not give references for this statement and it is hard to understand what he means by the fifteen New England Capital Laws, however, this is simply another attempt to Noahidize America.


Jewish Roots of the American Constitution

The fifteen Capital Laws of New England included the "Seven Noahide Laws" of the Torah, or what may be termed the seven universal laws of morality.

Prof. Paul EidelbergProf. Paul Eidelberg (Ph.D. University of Chicago), former officer U.S. Air Force, is the founder and president of the Israel-America Renaissance Institute (I-ARI), www.i-ari.org, with offices in Jerusalem and Philadelphia. He has written several books on American and on Jewish Statesmanship. His magnum opus The Judeo-Scientific Foundations of American Exceptionalism: Today’s Choice for the “Almost Chosen People" is in process of publication. Prof. Eidelberg lives in Jerusalem.

No nation has been more profoundly influenced by the "Old Testament" than America. Many of America's early statesmen and educators were schooled in Hebraic civilization. The second president of the United States, John Adams, a Harvard graduate, had this to say of the Jewish people:

The Jews have done more to civilize men than any other nation.... They are the most glorious Nation that ever inhabited the earth. The Romans and their Empire were but a bauble in comparison to the Jews. They have given religion to three-quarters of the Globe and have influenced the affairs of Mankind more, and more happily than any other Nation, ancient or modern.

The curriculum at Harvard, like those of other early American colleges and universities, was designed by learned men of "Old Testament" persuasion. Harvard president Mather (1685-1701) was an ardent Hebraist (as were his predecessors). His writings contain numerous quotations from the Talmud as well as from the works of Saadia Gaon, Rashi, Maimonides and other classic Jewish commentators.

Yale University president Ezra Stiles discoursed with visiting rabbis on the Mishnah and Talmud. At his first public commencement at Yale (1781), Stiles delivered an oration on Hebrew literature written in Hebrew. Hebrew and the study of Hebraic laws and institutions were an integral part of Yale's, as well as of Harvard's, curriculum.

Much the same may be said of King's College (later Columbia University), William and Mary, Rutgers, Princeton, Dartmouth and Brown University. Hebrew learning was then deemed a basic element of liberal education. Samuel Johnson, first president of King's College (1754-1763), expressed the intellectual attitude of his age when he referred to Hebrew as "essential to a gentleman's education."

This attitude was not merely academic. A year before the American Revolution, Harvard president Samuel Langdon, declared: "The civil polity of Israel is doubtless an excellent general model [of government]."

During the colonial and constitution-making period, the Americans, especially the Puritans, adopted and adapted various Hebraic laws for their own governance. The legislation of New Haven, for example, was based on the premise that "the judicial laws of God, as they were delivered by Moses, and as they are not ceremonial, shall generally bind all offenders...." Thirty-eight of the seventy-nine statutes in the New Haven Code of 1665 derived their authority from the Hebrew Bible. The laws of Massachusetts were based on the same foundation.

The fifteen Capital Laws of New England included the "Seven Noahide Laws" of the Torah, or what may be termed the seven universal laws of morality.

Now, without minimizing the influence of such philosophers as Locke and Montesquieu on the framers of the American Constitution, America may rightly be deemed the first and only nation that was explicitly founded on the Seven Noahide Laws of the Torah. It should also be noted that the constitutions of eleven of the original thirteen states made provision for religious education. Some even had religious qualifications for office.

The Institutions Prescribed by the American Constitution

The House of Representatives represents 435 districts of the United States, where the people of each district elect one person to represent their views and interests. The idea of district elections is implicit in the Torah. We read in Deuteronomy 1:13: "Select for yourselves men who are wise, understanding, and known to your tribes and I will appoint them as your leaders."

Exodus 18:19 states: "Seek out from among all the people men with leadership ability, God-fearing men, men of truth who hate injustice." Similar qualifications are prescribed in the original constitutions Maryland, Massachusetts, New Hampshire, and Rhode Island.

Each tribe was to select the best men to be their representatives. Rabbi Samson Raphael Hirsch comments that "each tribe (shevet) is to choose out of its own midst men whose character can only be known by their lives [hence whose character] is known only to those who have associated with them." This is the Biblical source of residential requirements for Representatives and Senators in the United States. Also, what is here called a "tribe" was called a "district" (pelech) after the Second Temple period.

Finally, it is a principle of Jewish law that "no legislation should be imposed on the public unless the majority can conform to it." (Avoda Zara 36a) This requires legislators to consider or consult the opinions of their constituents. Hence, representative democracy can be assimilated to Judaism by adding that representatives must be "men who are wise and haters of bribes." This would make for an aristocratic democracy, or a universal aristocracy - a kingdom of priests, of noblemen.

Unlike Israel, which has a Plural Executive, or cabinet, consisting of a prime minister and other ministers representing different political parties in the Knesset, the United States has a Unitary Executive, namely, the president. Of course the president has a cabinet, but its members cannot hold any other office and they are wholly responsible to the president, not to any political party.

It so happens that a Unitary Executive is a Torah principle. Thus, when Moses told Joshua to consult the elders when he was about to lead the Jews across the Jordan, God countermanded Moses: there can only be one leader in a generation. And if you look at Tractate Sanhedrin 8a, you will see that Jewish law opposes collective leadership. Nor is this all.

Just as a president of the United States must be a native-born American and not a naturalized citizen, so a king of Israel must be born of a Jewish mother and not a ger or convert.

So, we see that the original American Constitution was very much rooted in Torah Judaism.

Members of Knesset are not individually elected by the voters in constituency elections; hence, there is no accountability. In fact, MKs can ignore public opinion with impunity, as 23 Likud MKs did when they voted for Disengagement, contrary to their pledge to the nation in the January 2003 election.

The cabinet is a collection of rival party leaders competing for a larger slice of the national budget. This undermines national unity and national purpose. The average government last less than two years, which makes it impossible to pursue a consistent and long-range national strategy.

Israel's Supreme Court is the only court in the world that scorns the legal heritage of its own people. It has repeatedly handed down decisions that violate the basic beliefs and values of the Jewish people.