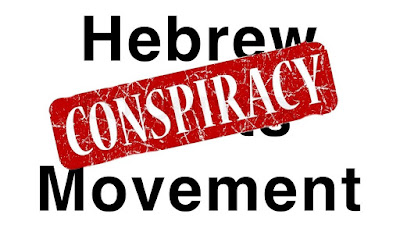 Hebrew Roots is a contemporary popular Christain movement which encourages Christians to adopt a lifestyle more conducive to the Old Testament, meaning they take on Hebrew culture and customs and don't engage in typically Christian holidays like Christmas or Easter. But the outreach program Jews for Judaims has stated that Hebrew Roots has become a source of much Noahide conversions, as these Christians learn more Old Testament, they very often leave Christianity and take on the Seven Noahide Laws instead. How many of these Hebrew Roots Christians are jumping ship?  How quickly can Noahidism spread?

JNS.org – Jason was raised in a typical, modern Christian home in the United Kingdom. He opened presents on Christmas and ate chocolate on Easter as he ebbed and flowed in his faith. In his 30s, he decided he was ready to have God as a constant presence in his life.

GET THE BEST OF THE ALGEMEINER STRAIGHT TO YOUR INBOX!SIGN UP!

“I started looking online at more modern ways of expressing my religious faith. I was interested in reading more about what Christians call the Old Testament,” explains Jason, who asked that his last name not be used in the article.

“After a few months, I decided that the Hebrew text was right,” Jason, who eventually became a Hebrew Roots follower, says.

Hebrew Roots adherents—not to be confused with Jews for Jesus, whose followers consider themselves Jewish and are known for intense proselytizing—are Torah-observant believers in Jesus, whom they identify by his Hebrew name, Yeshua. On the surface, many of the movement’s members look like observant Jews, keeping kosher (at least as outlined in the Bible), Shabbat, and holidays. They are generally pro-Israel and try to visit the Jewish state as often as possible.

But their religion centers on Jesus.

Ira Michaelson—outreach coordinator for Jews for Judaism, an education and counseling organization that seeks to counteract “deceptive proselytizing targeting Jews for conversion”—says the Hebrew Roots movement is “on the fringes of the fringe movement.” Its followers are rejected by Jews and Hebrew Christians (also known as Messianic Jews), and people don’t seem to stay in the movement for very long. They end up rejecting Christianity while they learn Torah, moving instead toward Noahidism or converting to some stream of Judaism. Noahidism refers specifically to those non-Jews who observe the seven Noahide Laws, which all of mankind can use as the basis of personal morality. (The seven laws are do not deny God; do not blaspheme God; do not murder; do not engage in incest, adultery, pederasty, or bestiality; do not steal; do not eat of a live animal; and establish courts or a legal system to ensure societal order and obedience.)

“This is an amazing thing,” Michaelson says, noting how overwhelming it can be for outreach workers like himself, who are usually the first contact for Hebrew Roots followers looking for something more. “We are dealing with a new community, in its infancy. Rabbis and anti-missionary professionals are being inundated with these people contacting us for help.”

According to a 2014 article published by Tablet magazine, there are 200,000-300,000 Hebrew Roots movement followers worldwide, most of whom joined in the past 15 years.

Michaelson tells JNS.org that while Judaism shies away from proselytizing, “certainly I don’t see why we don’t promote the truth, and the truth is God gave us the Torah to rouse people to be a model of what a relationship with Hashem is like and bring the other nations into a relationship with God in a proper way.”

On his Arutz Sheva radio show in Israel, “A Light unto the Nations,” Michaelson speaks on air with Hebrew Roots followers and is open to engaging in dialogue with them on Noahidism and conversion.

“There are so many people coming and saying, ‘What do I do now?’ They have rejected belief in Jesus, but they aren’t Jewish. You cannot pat them on the head and say, ‘Go away.’ I don’t have the answer, but I am trying to get the rabbis to address this,” Michaelson says.

April Nefores, founder of the popular Facebook group “Leaving Christianity and Finding the Truth,” says her online community offers one solution. She describes it as a “one-stop shop for everything Orthodox Jewish.” Among the nearly 1,000 followers of the public group, as well as the 1,052 members of the private group, one-third are Orthodox Jews, one-third are Noahides, and one-third are Christians seeking conversion.

“The stories on this thread will blow your mind,” says Nefores, who herself was raised in a Baptist school, with a Christian mother and Jewish father. She says Christians looking to convert have the misconception that they have to “be something,” which is not the case.

“They say, ‘I was a Christian, I left that, so now I need to convert.’ Hold on! You don’t have to convert to Judaism. Not everyone has to be called a Jew. God did not make everyone Jewish. You could be a Noahide,” says Nefores. “But if you feel in your heart you were born to be Jewish, I absolutely have rabbis in the group that can do conversions.”

Nefores is now an Orthodox Jew. She was raised in America’s South and was taught that Jews—her father included—were going to “burn in hell” for their lack of belief in Jesus. She always felt uncomfortable about it, but was never encouraged to explore why.

“[The Christian theologians I grew up with] tell you to go on faith. To just believe,” Nefores says.

As she got older, Nefores was less willing to blindly follow. During a more traumatic period in her life, she reconnected with a high school friend who had become a Messianic Jew. The two started learning the Old Testament online and exploring their Jewish roots. One year, Nefores didn’t buy a Christmas tree. Soon after, she stopped going to church. Her friend left Messianic Judaism, too.

“I felt alone in the world. There was no church, no shul. ‘What am I?’ I asked myself,” she says.

A rabbi told Nefores to explore her family tree, and she discovered she was Jewish. She re-married her husband through an Orthodox ceremony and has embraced the Jewish faith ever since.

Jason from the U.K. left the Hebrew Roots movement to find faith, too. He did not convert to Judaism and does not consider himself Jewish, but says he is “living as part of the Jewish community” and believes in God from Judaism’s perspective.

“By 2012, I started to severely question the New Testament,” Jason recalls. “I said a prayer one evening: ‘God, I know you are there, but I am not sure about anything else. I want you to punch me into shape. Just make it plan and obvious.’ Today, I am sojourning within the gates of the Jewish community.”

In other words, Jason wants more than the seven Noahide laws, but does not go as far as identifying as a Jew.

“We are all excited about this,” Michaelson says regarding the surge of Hebrew Roots followers embracing some form of Jewish tradition. “We are seeing a groundswell.”
Posted by Just Another Hindu at 12:50 PM