On kings and Noahide courts, yes non-Jews can be killed now 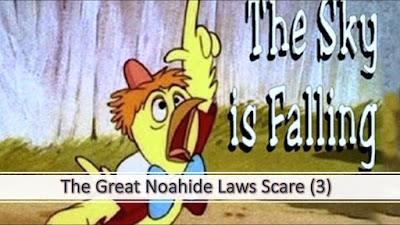 
There are several forms of deceptions that Noahide advocates use to make the Noahide Laws seem innocuous and that non-Jews need not fear for their lives. Some will say that there can be no Noahide executions because there is no Sanhedrin (Jewish High Court) at this time, however famous Jewish scholars have stated there is no need for a Sanhedrin to execute non-Jews as the Noahide commandments to establish courts of justice resides outside this stricture (here), only Jews must wait for a Sanhedrin to be executed, for non-Jews it can come at any time. They may also try to tell us that the Talmud has very strict requirements for metting out the death penalty, but unlike Jews who need two witnesses to their crime and a full Sanhedrin of Jewish judges, non-Jews need only one witness and one judge to be condemned to death (here). Finally sometimes Talmudists will tell us that the Talmud says that a Sanhedrin that executes a criminal even every seventy years is "murderous", but where this is stated is a very specific case where the court is dealing with judges who are trying to remember details from an old case which has already been tried (here), this is not a normal circumstance. We do know that the Sanhedrin did execute people (here), but it doesn't even matter because non-Jews don't need a Sanhedrin. Additionally, the Zionist state of Israel has found it appropriate to make other legal decisions which should only be made by a Sanhedrin (here), so why can't  they take it into their hands to execute non-Jews?  But even killing Jews might be easier than one thinks. Rabbis seem to clash on how and when the death penalty can be given out even to Jews. Some contend that the Noahide Law on establishing courts includes electing a Noahide king to rule over non-Jews (here). According to Talmudic scholars, a king can give the death penalty without a Sanhedrin and that perhaps a Supreme Court is too cumbersome to run a nation, this is what Jews call "king's justice". In the article below, Jewish scholars state that the Noahide Laws are incumbent upon non-Jews even when Jews are unable to establish their own courts for themselves because under king's justice even Jews can be killed without a high court, and Noahide Law and king's justice are synonymous. But again, there is not even a requirement for non-Jews to have a king to execute those who disobey the Noahide Laws, all you need is the will on the part of Jews and their Noahide servants!

ASK THE RABBI: DOES JEWISH LAW PROMOTE THE DEATH PENALTY?


As we saw in our previous column on executing convicted terrorists or enemy combatants, Jewish law has a complex relationship with the death penalty.

Almost every country in the Western world has banned the use of capital punishment in its civil penal system. The one prominent exception is the United States, which continues to debate the efficacy and morality of the death penalty for murderers. Supporters and abolitionists alike have pointed to the Jewish tradition in support of their positions. We’ll review the evidence, while focusing on the question of what authority might allow the state to execute a human being, including its own citizens.

As we saw in our previous column on executing convicted terrorists or enemy combatants, Jewish law has a complex relationship with the death penalty.

The Bible mandates the death penalty in roughly 30 circumstances. One possible justification for such a harsh punishment is “just desert” – namely, something that is deserved or merited, as in the case of murder. “…The penalty shall be life for a life, eye for an eye, tooth for a tooth…” (Exodus 21:23-24). Elsewhere, the Torah speaks of harsh punishments to deter others from doing similar acts and to remove the threat represented by this criminal. “Thus will you sweep out evil from your midst. Others will hear and be afraid, and such evil things will not be done again in your midst” (Deuteronomy 19:19-20). This perspective of deterrence and prevention was adopted by medieval thinkers like R. Sa’adia Gaon and the unknown author of Sefer Hahinuch.

Yet within talmudic literature, one finds severe impediments in implementing these punishments. For starters, strict evidential requirements make it difficult to convict a person of a capital crime, to the extent that a court which administered a death penalty every seven years (according to others, every 70 years) was called as a “destructive tribunal.”

Moreover, 40 years before the Temple’s destruction, the Sages stopped convening to order such executions since an increase in violence led them to conclude that the death penalty was no longer an effective deterrent. Following the Temple’s destruction, it became legally impossible as well since the law demands the death penalty to only be administered by the High Court (Sanhedrin) when it sits in judgment next to a functioning Temple. Accordingly, one might conclude, as Rabbi Shimshon R.

Hirsch did, that the biblical punishment became less of a practical measure and more of a moral lesson that our right to life is contingent on respecting the rights of others.

Yet as Simcha Assaf has documented, significant literature indicates that in the medieval and early modern periods, Jewish communities occasionally executed criminals. Such capital punishment seemingly drew its legitimacy from the talmudic proclamation that “A judicial court may impose flagellation and pronounce capital sentences even when not warranted by the Torah.” Accordingly, in cases of social exigency, the court may administer corporal punishments beyond the letter of the law. Yet the question remains what basis courts or governments, both then and now, have for such sentences in the absence of a contemporary Sanhedrin.

Many have cited the Biblical notion of the “king’s justice” (mishpat hamelech) as depicted in the Book of Samuel when the Jewish people requested a king. “We will be like all the nations, our king will judge us, and go out at our head and fight our battles.” This power, it seems, allows the king to administer justice – including the death penalty – without the confines of the strict rules of evidence required by a Sanhedrin. In fact, Rabbenu Nissim of Gerona further suggested that an alternative system was envisioned precisely because the Sanhedrin model of justice would be too cumbersome to effectively run a nation. As Rabbi J. David Bleich has noted, many rabbinic scholars have asserted that this authority would apply equally to Jewish and non-Jewish governmental powers alike.

In fact, one prominent 20th-century scholar, Rabbi Meir Simha of Dvinsk, contended that mishpat hamelech is an extension of the Noahide Law that requires the establishment of a justice system (dinim) for every society. Rabbinic literature makes clear that gentiles may be executed for violating norms established under the Noahide Code. Some medieval authorities even understood this to be a mandatory punishment. Yet as Arnold Enker has shown, the 12th-century scholar Rabbi Meir Abulafia, along with several 20th-century scholars like rabbis Meir Don Plotzki and Yosef Henkin, asserted that civil authorities have permission to administer corporal punishments for such infractions but are not required to do so.

In the contemporary era, rabbinic scholars have been divided over the utility of the death penalty. Israeli chief rabbis Yitzhak Herzog and Benzion Uziel asserted that Halacha did not require using the death penalty in the fledging State of Israel, especially with severe jail sentences providing a satisfactory alternative. Yet in 1981, Rabbi Moshe Feinstein, in a letter to New York Governor Hugh Carey, argued that Jewish law would support the utilization of this extreme measure if it could effectively deter the rampant homicide rates and consequential cheapening of human life. This position was strongly opposed by Rabbi Aharon Soloveichik, who argued that the death penalty was an intolerably cruel punishment given that it was no more effective as a deterrent than life in prison. Additionally, Prof. Aaron Kirschenbaum has noted that medieval authorities were very wary of applying lower standards of proof to execute criminals, fearing the possibility of killing an innocent person. In light of the growing number of cases in which DNA evidence has proven that defendants were wrongly convicted (and even executed), one may certainly cast doubt on whether Jewish law can tolerate death sentences when the justice process seems insufficiently sound.

The writer teaches at Yeshivat Hakotel, directs the Tikvah Israel Seminars, and is a junior scholar in the Judaism and Human Rights project at the Israel Democracy Institute.

Posted by Just Another Hindu at 7:27 AM