The Noahide Laws are based in "rationalism" says Noahide 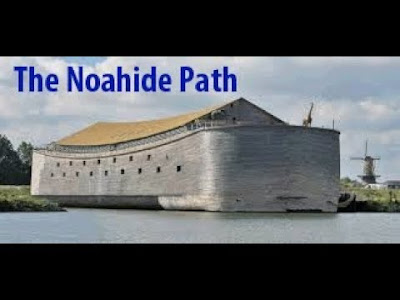 
Jews are confused as to whether non-Jews simply need to follow Noahide Law (here), or do they have to follow and believe they are divine/ In this article a Noahide talks about the difference between the laws Noahides follow and the laws Jews follow. First the writer tries to tell us that the Noahide Laws are derived from rationalism, even though prohibiting idol worship, blasphemy and sexual expression are not rational but subjective ethics. But he says Jews have more of a supernatural element to their religion in that they have more commands upon them that are not necessarily rational, such as resting on the 7th day for Sabbath... why the 7th day... because god said so that is why. It would seem Noahides have much less supernatural customs, they obey the Noahide Laws and have few if any holidays or special requirements that contain any sort of supernatural element to them. But in this Noahide's opinion, even if these Noahides Laws are so-called "rational" (which they aren't), non-Jews still need to follow them because they are divine, not just because they feel they are wise. So what if they find out your just following the Noahide Laws to get away with it, are you beheaded? Will there be inquisitions?

A moral system that lacks a sense of the divine is eventually degraded to a mere human convention, whose observance reflects utilitarian considerations rather than any transcendent goal. Are Noahide laws only ethical or is there a spiritual element?

More from the author ►
Rabbi Dr. Shimon Dovid Cowen’s masterful exposition of the Noachide Commandments highlights how the seven universal commandments can be extended into a complex and sophisticated set of laws.* By doing so, Dr. Cowen disabuses Jews from the notion that God has only minimal ethical and spiritual expectations from Gentiles. On the other hand, he also demonstrates to Gentiles that the Jewish religious tradition provides the human race with a comprehensive and fulfilling set of ethical and spiritual responsibilities.

Dr. Cowen highlights how Noachide Law enjoins humanity to follow the ethical laws which the human mind is rationally capable of discovering. That is, the Torah’s Mishpatim. It is therefore not surprising that Noachide Commandments forbid adultery, murder and stealing, like virtually all moral systems throughout human history.

From the prohibition of stealing, Rabbi Dr. Cowen derives the commandment for Gentiles to honor their parents. Not doing so would result in a failure to repay a huge moral debt. Since defaulting on a debt that one is able to repay amounts to a form of theft, Dr. Cowen demonstrates how one of the Ten Mosaic Commandments is latent in the Seven Noachide Commandments.

Dr. Cowen's book illustrates how the Noachide Commandments can be extended to encompass virtually all rational commandments. Therefore the question arises whether the mitzvoth which God enjoins the Jewish People all contain elements of Chok, namely of a supra-rational statute. A close analysis of specifically-Jewish mitzvoth suggests this is true.
Shabbat, for example, contains elements of both Chok and Mishpat. The rational element of Mishpat is embodied in the cessation of work during the Jewish Sabbath which makes it special among the seven days of the week.  This rational element is partially found in the spiritual traditions of other nations, which also celebrate religious holidays with a cessation of commercial activities.

The Shabbat’s supra-rational element of Chok is discernable in the details of Sabbath observance and in the fact that God commanded the seventh day to be special, rather than the first day when God began creation or the sixth day corresponding to the creation of Man. The fact that Jews are historically alone among the nations in sanctifying the Sabbath shows that the timing and minutiae of this Jewish holy day are supra-rational.

The same admixture of Chok and Mishpat is discernable in all other mitzvoth unique to the Jewish people. Circumcision is rational since it serves a hygienic purpose. However, the selection of the eighth day for the performance of this mitzvah is supra-rational. Although claims have been made that the mitzva’s timing reflects a steep decrease in infant mortality due to circumcision on this day, the fact remains that a further reprieve would make sense from a purely medical point of view.

To state that all Jewish mitzvoth contain an element of supra-rationality does not diminish the wisdom and intelligence of these mitzvoth. On the contrary, the supra-rational survival of the Jewish people is owed to Jewish observance of commandments such as the Sabbath and Kashrut which are partially supra-rational.

This situation begs the question: Is it not demeaning for non-Jews to be excluded from supra-rational commandments? In this instance, the Rambam’s wisdom and universal horizons come to the fore. In the Mishna Torah he states:

“Anyone who accepts upon himself and carefully observes the Seven Commandments is of the Righteous of the Nations of the World and has a portion in the World to Come. This is as long as he accepts and performs them because (he truly believes that) it was the Holy One, Blessed Be He, Who commanded them in the Torah, and that it was through Moses our Teacher we were informed that the Sons of Noah had already been commanded to observe them. But if he observes them because he convinced himself, then he is not considered a Resident Convert and is not of the Righteous of the Nations of the World, but merely one of their wise.”

This passage demonstrates the non-Jews are also subject to a supra-rational commandment. Namely, to the belief that the rational laws they follow have a divine origin. This qualification is crucial. Any moral system that lacks a sense of the divine and absolute is eventually degraded to a mere human convention, whose observance reflects utilitarian considerations rather than any transcendent goal. In due time, as we observe in contemporary Western societies, this outlook promotes ethical relativism and behavior which degrades humankind.

The Rambam's injunction thus makes non-Jewish humanity a partner of the Jewish people in shared submission to supra-rational commandments. It also lays foundations for the universal ethics of humanity to be solid and durable.

Viewing Noachide Commandments as an expression of rational Mishpatim has important implications in contemporary Jewish discourse. If non-Jews are forbidden from aborting except in cases when a pregnancy endangers the mother’s health and if non-Jews are forbidden from sexual activities which have gained broad acceptance in secular society, this means that the grounds for the prohibition of these practices are rational rather than supra-rational.

Taking note of this fact is important. Many religious Jews who oppose abortion and sexual immorality do so with purely religious arguments, implying that no valid secular argument can be made against them. The fact that these prohibitions are included in the Noachide Commandments reminds us that above and beyond doctrinal credos, a deep rational wisdom underpins the position of traditional Judaism on these matters.
Rabbi Dr. Cowen’s masterful analysis of the Noachide Commandments thus enables the reader to better appreciate the Mosaic Commandments. By highlighting how each set of laws complements the other, the reader is able to understand that far from being a marginal aspect of the Jewish tradition, the Noachide Commandments assert the centrality of rational behavior for the non-Jewish world and a judicious blend of rational and supra-rational behavior for the Jewish world. This blend has allowed the Jewish nation to survive and flourish throughout the millennia. Eventually, it will also pave the way for the ethical elevation of all humanity.

*The Theory and Practice of Universal Ethics – the Noahide Laws, New York: Institute for Judaism and Civilization (printed by Kehot Publication Society), 2015.
Posted by Just Another Hindu at 8:48 AM